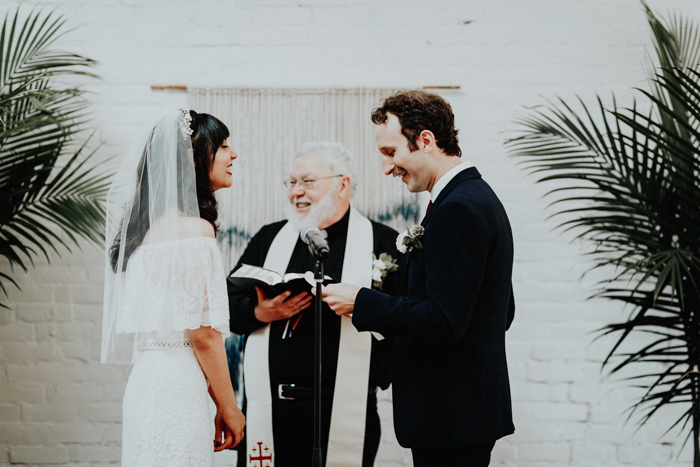 Just as we believe that couples should write their own wedding vows, we love when couples include wedding ceremony readings to further personalize their big day. If religious readings aren’t for you, consider passages or quotes from unexpected sources, such as your favorite children’s book, a quirky rom-com, or a classic novel. There are inspirational gems about marriage, love, and relationships everywhere. Searching for them can feel like a fun scavenger hunt—or it can feel daunting.

We’ve rounded up some of our favorite unique ceremony readings that would be perfect to read during your ceremony. They talk about a love story, the little things in love, and are non religious. Whether you want something short and sweet, lighthearted, or deep, we’re confident you haven’t heard these readings too often.

Harry Potter and the Deathly Hallows by J.K. Rowling

“Luna had decorated her bedroom ceiling with five beautifully painted faces: Harry, Ron, Hermione, Ginny, and Neville. They were not moving as the portraits at Hogwarts moved, but there was a certain magic about them all the same. Harry thought they breathed. What appeared to be fine golden chains wove around the pictures, linking them together, but after examining them for a minute or so, Harry realized that the chains were actually one word, repeated a thousand times in golden ink: friends. . . friends . . . friends . . .”

Sex and the City

“His hello was the end of her endings. Her laugh was their first step down the aisle. His hand would be hers to hold forever. His forever was as simple as her smile. He said she was what was missing. She said instantly she knew. She was a question to be answered. And his answer was ‘I do.’”

One Tree Hill (based on a quote from Dante Alighieri)

“Remember tonight, for it is the beginning of always. A promise. Like a reward for persisting through life so long alone. A belief in each other and the possibility of love. A decision to ignore, simply rise above the pain of the past. A covenant, which at once binds two souls and yet severs prior ties. A celebration of the chance taken and the challenge that lies ahead. For two will always be stronger than one, like a team braced against the tempest civil world. And love will always be the guiding force in our lives. For tonight is a mere formality. Only an announcement to the world of feelings long held. Promises made long ago. In the sacred spaces of our hearts.”

“We need a witness to our lives. There are a billion people on the planet…I mean, what does any one life really mean? But in a marriage, you’re promising to care about everything. The good things, the bad things, the terrible things, the mundane things. All of it, all of the time, every day. You’re saying ‘Your life will not go unnoticed because I will notice it. Your life will not go un-witnessed because I will be your witness.’”

The Nightmare Before Christmas

“My dearest friend, If you don’t mind, I’d like to join you by your side. Where we could gaze into the stars, and sit together, now and forever. For it is plain as anyone could see, we’re simply meant to be.” 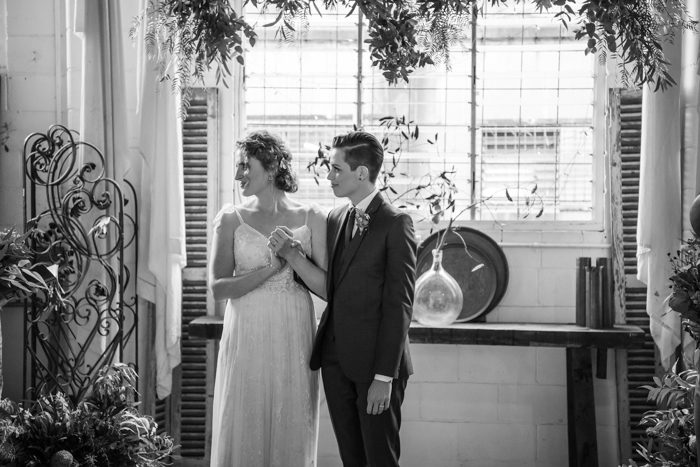 All of what I really need to know about how to live, and what to do, and how to be, I learned in Kindergarten. Wisdom was not at the top of the graduate school mountain, but there in the sandbox at nursery school.
These are the things I learned…
Share everything.
Play fair.
Don’t hit people.
Put things back where you found them.
Clean up your own mess.
Don’t take things that aren’t yours.
Say sorry when you hurt somebody.
Wash your hands before you eat.
Flush.
Warm cookies and cold milk are good for you. Give them to someone who feels sad.
Live a balanced life.
Learn some and think some and draw and paint and sing and dance and play and work every day.
Take a nap every afternoon.
Be aware of wonder.
Remember the little seed in the plastic cup? The roots go down and the plant goes up and nobody really knows how or why, but we are all like that.
Everything you need to know is in there somewhere.
And it is still true, no matter how old you are when you go out into the world, it is best to hold hands and stick together.

The Beatrice Letters by Lemony Snicket

“I don’t believe in marriage. I think at worst it’s a hostile political act, a way for small-minded men to keep women in the house and out of the way, wrapped up in the guise of traditional and conservative religious nonsense. At best, it’s a happy delusion — these two people who truly love each other and have no idea how truly miserable they’re about to make each other. But, but, when two people know that, and they decide with eyes wide open to face each other and get married anyway, then I don’t think it’s conservative or delusional. I think it’s radical and courageous, and very romantic.”

“The future belongs to hearts even more than it does to minds. Love, that is the only thing that can occupy and fill eternity. In the infinite, the inexhaustible is requisite.

Love participates of the soul itself. It is of the same nature. Like it, it is the divine spark; like it, it is incorruptible, indivisible, imperishable. It is a point of fire that exists within us, which is immortal and infinite, which nothing can confine, and which nothing can extinguish. We feel it burning even to the very marrow of our bones, and we see it beaming in the very depths of heaven…

What a grand thing it is to be loved! What a far grander thing it is to love! The heart becomes heroic, by dint of passion. It is no longer composed of anything but what is pure; it no longer rests on anything that is not elevated and great. An unworthy thought can no more germinate in it, than a nettle on a glacier. The serene and lofty soul, inaccessible to vulgar passions and emotions, dominating the clouds and the shades of this world, its follies, its lies, its hatreds, its vanities, its miseries, inhabits the blue of heaven, and no longer feels anything but profound and subterranean shocks of destiny, as the crests of mountains feel the shocks of earthquake.

If there did not exist someone who loved, the sun would become extinct.”

The Alchemist by Paulo Coehlo

“When he looked into her eyes, he learned the most important part of the language that all the world spoke — the language that everyone on Earth was capable of understanding in their heart. It was love. Something older than humanity, more ancient than the desert. What the boy felt at that moment was that he was in the presence of the only woman in his life, and that, with no need for words, she recognized the same thing. Because when you know the language, it’s easy to understand that someone in the world awaits you, whether it’s in the middle of the desert or in some great city. And when two such people encounter each other, the past and the future become unimportant. There is only that moment, and the incredible certainty that everything under the sun has been written by one hand only. It is the hand that evokes love, and creates a twin soul for every person in the world. Without such love, one’s dreams would have no meaning.”

“Love is a temporary madness; it erupts like volcanoes and then subsides. And when it subsides, you have to make a decision: You have to work out whether your roots have so entwined together that it is inconceivable that you should ever part. Because this is what love is. Love is not breathlessness, it is not excitement. It is not the promulgation of promises of eternal passion. That is just being ‘in love,’ which any fool can do. Love itself is what is left over when being ‘in love’ has burned away, and this is both an art and a fortunate accident. Those who truly love have roots that grow toward each other underground, and when all the pretty blossoms have fallen from their branches, they find that they are one tree and not two.”

To love is not to possess,
To own or imprison,
Nor to lose one’s self in another.
Love is to join and separate,
To walk alone and together,
To find a laughing freedom
That lonely isolation does not permit.
It is finally to be able
To be who we really are
No longer clinging in childish dependency
Nor docilely living separate lives in silence,
It is to be perfectly one’s self
And perfectly joined in permanent commitment
To another–and to one’s inner self.
Love only endures when it moves like waves,
Receding and returning gently or passionately,
Or moving lovingly like the tide
In the moon’s own predictable harmony,
Because finally, despite a child’s scars
Or an adult’s deepest wounds,
They are openly free to be
Who they really are–and always secretly were,
In the very core of their being
Where true and lasting love can alone abide.

Looking for even more ways to personalize your wedding? Take a peek at these planning ideas: 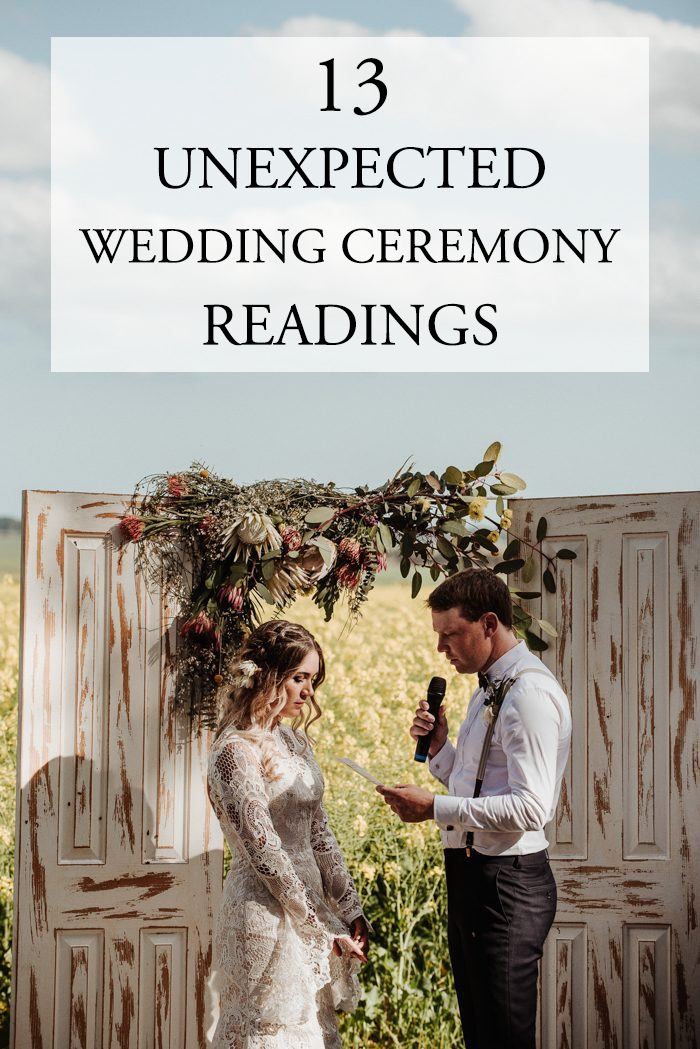 No comments to show.
We use cookies on our website to give you the most relevant experience by remembering your preferences and repeat visits. By clicking “Accept All”, you consent to the use of ALL the cookies. However, you may visit "Cookie Settings" to provide a controlled consent.
Cookie SettingsAccept All
Manage consent

This website uses cookies to improve your experience while you navigate through the website. Out of these, the cookies that are categorized as necessary are stored on your browser as they are essential for the working of basic functionalities of the website. We also use third-party cookies that help us analyze and understand how you use this website. These cookies will be stored in your browser only with your consent. You also have the option to opt-out of these cookies. But opting out of some of these cookies may affect your browsing experience.
NecessaryAlways Enabled
Necessary cookies are absolutely essential for the website to function properly. These cookies ensure basic functionalities and security features of the website, anonymously.
Functional
Functional cookies help to perform certain functionalities like sharing the content of the website on social media platforms, collect feedbacks, and other third-party features.
Performance
Performance cookies are used to understand and analyze the key performance indexes of the website which helps in delivering a better user experience for the visitors.
Analytics
Analytical cookies are used to understand how visitors interact with the website. These cookies help provide information on metrics the number of visitors, bounce rate, traffic source, etc.
Advertisement
Advertisement cookies are used to provide visitors with relevant ads and marketing campaigns. These cookies track visitors across websites and collect information to provide customized ads.
Others
Other uncategorized cookies are those that are being analyzed and have not been classified into a category as yet.
SAVE & ACCEPT